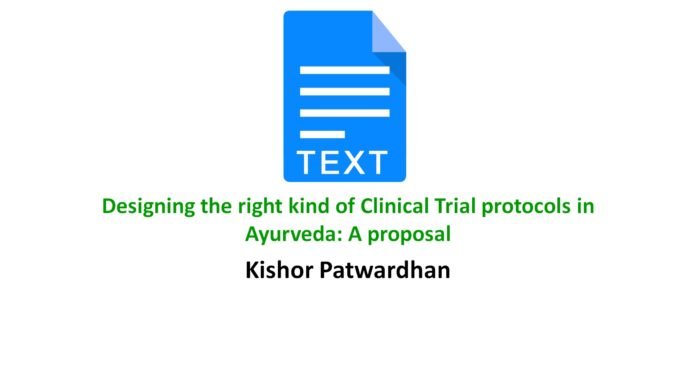 Double-blind randomized placebo-controlled trials have been long regarded as the gold standards that provide evidence regarding the efficacy of any intervention, and hence, one cannot afford to ignore this trend. When there are sufficient numbers of such double-blind trials, there will be room for meta-analyses and systematic reviews which will form the best possible evidence. However, when one considers Ayurveda interventions, it becomes obvious that there are no good meta-analyses in the literature because of a paucity of good clinical trials. On PubMed search, for instance, we get roughly 130 clinical trials when the search term ‘Ayurveda’ is entered. Therefore, there cannot be an argument against the need for good clinical trials in Ayurveda.

Why conducting good clinical trials in Ayurveda is difficult?

Ayurveda is a complex system that considers multiple clinical and other parameters while deciding a specific line of treatment. These parameters include individual constitution (Prakriti), digestive strength (Agnibala), nature of bowel evacuation (Koshtha), Saama-Niraama state (metabolically immature and mature state) and many more. Further, the diagnosis of a disease in Ayurveda too is complex one. For example, different individuals suffering from the same clinical condition, noninfective gastroenteritis for example, may be diagnosed by different names such as Visuchika, Atisara, Grahani, Ajirna, Adhoga Amlapitta, Shula etc. Further, there could be external factors such as seasons (Ritu) and Desha (place of residence) that might differ in each of these individuals. This in fact leads to many possible permutations and combinations in interventions. In a nutshell, different patients suffering from same disease may receive different interventions according to Ayurveda.

This situation poses a challenge in designing a good clinical trial because the generally accepted method of conducting clinical trial involves comparing the efficacy of one intervention against either placebo or another intervention. Mostly, a linear cause-effect relationship is assumed in such trials. For example, it may be one antibacterial agent vs another antibacterial agent in case of infective conditions, and one analgesic versus another analgesic in conditions that are associated with pain. This model may be sufficient to guide biomedical clinical practice because this is how biomedicine is practiced. However, this model of clinical trials is not suitable in the context of Ayurveda because multiple algorithms are involved in decision-making by Ayurveda practitioners. This is the reason why available literature on Ayurveda clinical trials is grossly insufficient: these protocols are blind copies of the clinical trials involving biomedical interventions. Therefore, there is a huge gap between how Ayurveda is practiced and how it is researched!

It is important to note that during the past few years there have been a few sincere attempts at designing right kind of Ayurveda clinical trials in a manner that is true to the principles of Ayurveda. In one of these trials on rheumatoid arthritis, the autonomy of a physician in the form of individualizing the complex interventions was preserved. Because this study was published in one of the leading journals of rheumatology, it was expected that many such studies would be attempted at. However, it is strange to see that researchers have not yet considered this as the right template for building up evidence in favor of Ayurveda interventions. One of the reasons for this is that Ayurveda academia does not take up serious kind of research in general. Another factor may be that most of the Ayurveda teachers are ignorant of these attempts and hence, this model has not yet probably percolated into Ayurveda colleges and research institutions.

I suggest that the complexity involved in deciding interventions must be considered at an early stage while designing a good clinical trial. All possible permutations and combinations of parameters and diagnoses must be enumerated in the beginning itself and the individualization methods must be made clear. It is a good idea to include a panel of clinically successful Ayurveda practitioners to deliberate and finalize this. Such a trial would prove fruitful in testing the “whole system” against either standard of care or a placebo, as the case may be. A good protocol for Ayurveda clinical trial must at the beginning itself have clear-cut flowcharts designed and individualization methods finalized. A flowchart involving the following factors must be prepared and each intervention at every possibility must be pre-decided:

The factors related to the individual could be Prakriti, Agnibala, Koshtha, Dhatu Sarata, occupation of the individual, lifestyle, dietary habits, etc

While reporting, though conventional biomedical diagnosis must also go in the title, I suggest that a detailed algorithm followed while deciding the intervention may also be provided.

Limitations of this approach and available alternatives:

Yes, this approach may be too complex and it may be difficult to enumerate all possible permutations and combinations beforehand. Conducting such complex studies with the limited available resources may be another problem. This is especially true because as the number of permutations and combinations increase, the number of formulations and other interventions too would increase. Standardization of raw materials, standardization of pharmaceutical processes etc would consume lot of time and resources. In such cases, I suggest that a study can be limited to one set of possibilities. For example, a study could be framed something like “Effectiveness of Ayurveda intervention in the young-adult population of Pitta Prakriti with acid-peptic disease presenting as Vidagdhajirna in Sharad Ritu”. Though such an alternative would require excluding many cases of the same disease, still would prove to be practical.

Most of the hardcore science lovers have a bias against alternative therapies and often call such methods ‘pseudo-medicine’ or ‘pseudoscience’. It is high time that Ayurveda researchers come up with right kind of clinical trial protocols and start publishing the results. This would in a long run help everyone of us to understand what Ayurveda actually is. Till that time Ayurveda will continue to be perceived by scientists based on the trials that are poorly designed and that ignore core principles.