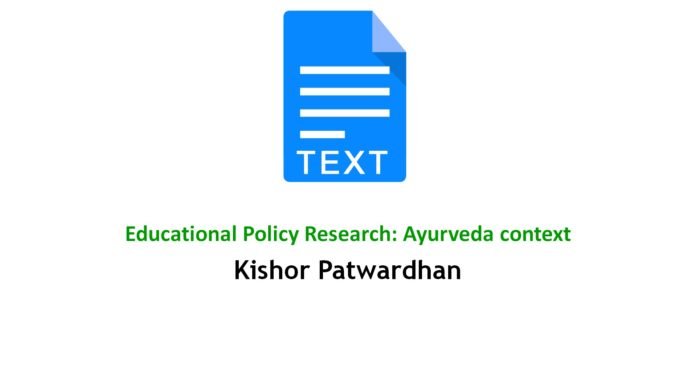 A robust education system is a prerequisite for any stream of applied science to ensure its relevance with respect to the changing societal needs. It is expected that the education system must keep evolving itself into more efficient one on the basis of new advances in the knowledge, changing value systems and needs of the society, technological advances, and, changing connotations of learner-teacher relationship. Education scenario in Ayurveda, however, is lagging behind in many of these aspects and there appears to be a general consensus in favor of improving the situation so that the strengths of Ayurveda can be utilized to the fullest extent.

The major problems that Ayurveda education sector currently faces are: lack of required exposure to basic clinical skills during graduate level of education, inadequate training in research domain, too much of reliance on textual references than on practical utility, non-availability of standard resource material that addresses current healthcare needs of the society etc.

The traditional learning method of Ayurveda was that of Gurukula, where a student used to stay with his Guru for several years to be trained. The Guru used to have a small group of students at his place that used to discuss, observe and help him in carrying out various activities such as collecting herbs, preparing the medicines and performing different clinical procedures. Because this was a small group, learning was possibly natural, spontaneous and informal. Possibly it was also based on competency than mere theoretical knowledge. As this system got transformed into universities, learner-teacher interaction became minimal. This system has made ‘commercial success’ the most important motivating factor for a student, instead of ‘compassion’. Further, the competitive stress has become an inherent part of the learning process.

Most of the medical educationists have realized the drawbacks of the process of ‘institutionalization’, and have started exploring alternative methods of teaching and learning. The proposals such as small-group discussions, competency based curriculum, parallel and vertical integrative strategies of teaching etc. are the results of such realization. Surprisingly, most of these newer methods mimic the ancient method of education that was followed in Gurukula.

There have been two prominent streams of thought when it comes to the question “How should Ayurveda be taught and practiced?” While one school proposes that Ayurveda must be taught strictly along the lines of Ayurveda logic and epistemology, the other proposes an integrative approach that incorporates the inputs from various streams of sciences. The first school is of the opinion that Ayurveda is complete by itself and does not need interpretation and research on contemporary science-based parameters, whereas the second school proposes that integrating recent scientific advances into Ayurveda is absolutely in congruence with the spirit of Ayurveda and therefore, Ayurveda practices must be put under the lens of the recent advances in biological sciences.

The status of educational research:

The answers to the dilemmas such as the one posed above will emerge only when rigorous educational research is introduced in Ayurveda system of education. It is disappointing to note that this area has been one of the most neglected in the field of Ayurveda. For instance, a PubMed search for the terms ‘Ayurveda’ and ‘Education’, entered with a rider that both these terms must occur either in the title or in the abstract, gives less than 50 results.

Teaching and learning process in Ayurveda colleges has not changed much in spite of the availability of technological tools in the education sector. Standard e-contents such as standard e-textbooks, good videos to demonstrate diagnostic and therapeutic procedures etc., are still not available. This has led to a lot of subjectivity in teaching. There is often a great deal of difference between different interpretations of the core concepts of Ayurveda from one expert to another. Examinations and assessments in Ayurveda too have largely remained recall-based with least emphasis on evaluating the higher order thinking skills. During their postgraduate education too, the students are not introduced to the effective teaching and learning techniques. Educational research has not been considered as an attractive option by most of the researchers.

As a result, different stakeholders take advantage of the situation to push their own agenda. For instance, during past decade, the Central Council of Indian Medicine (CCIM) has introduced many changes in curricula and syllabi repeatedly without having a truly meaningful intellectual debate and evidence-base to support these revisions. Similarly, a delegation from Kerala (composed of many pharmaceutical firms) has recently requested the Government of India for reduction of modern science-based topics from the BAMS syllabus. Such experiments and requests are highly opinionistic and lack research-generated data to support.

Need for a cross-talk:

India still follows a parallel kind of approach while China, Vietnam and a few more countries follow integrative policy model in traditional medicine education and practice. This parallel policy model has probably prevented Ayurveda students in acquiring required skills and knowledge related to the contemporary needs of the society. Since the cross-talk between the different streams of physicians has been negligible, a state of cognitive dissonance sets in among the students leading to patchy knowledge and skills – both in Ayurveda and contemporary biomedical sciences – with an inability to connect the two. To promote a crosstalk between different streams of medical professionals, we need to encourage the incorporation of some introductory material related to Ayurveda in the curriculum of graduate level of conventional medical programs. Presently, medical graduates do not know to what AYUSH interventions their patients might have been subjected. They also do not know when to refer their patients to AYUSH practitioners. They are neither introduced to AYUSH modalities that can complement and enhance the clinical outcome. We have proposed that a small Ayurveda module be introduced in graduate level curriculum of MBBS. This would sensitize these students towards Ayurveda, which will, in future, certainly help in promoting an attitude of inquiry, thus promoting much needed collaborative research in various fields of health sciences.

Bringing a paradigm shift in the education strategies, though, can happen through right kind of policies, it is difficult to expect such dramatic changes happening overnight. This shift can happen only through a continuous and sustained research on educational policies. It is to be noted that, currently, all the education-related policies are being framed based on the opinions of certain expert groups and not on the basis of research. Therefore, there is a need for creating a ‘research-base’ to support policies of AYUSH education. This would help the policy makers to consider positive corrections in education system.

We propose setting up of an “Institute for AYUSH Education Policy Research”, or, even better, an “Institute for Medical Education Policy Research”. Many top Universities and Governments world over, already have such centers and institutes for “health education policy research”. Though there are some groups and institutions engaged in ‘health policy research’ and public health research in India, ‘AYUSH education’ has received minimal attention in their debates and deliberations so far.

If such an ‘AYUSH education policy research institute’ is setup, it needs to take up certain important questions, and must be asked to come up with evidence-base to enable us to have answers to these questions:

1. Is a single model of AYUSH education and practice sufficient to cater to the healthcare needs of the public in all regions / states / of all socioeconomic strata? (e.g., Applicability of Kerala model of Ayurveda Education and Research in UP/Bihar).

2. Are the kinds of health conditions being treated by differently trained physicians in different regions/ set-ups similar or different?

3. Which kind of Ayurveda education gives maximum health benefits to the society (e.g., integrative model of BHU or classical model of Kottakkal)?

4. Are the kinds of patient populations being served in different regions by Ayurveda physicians (based on education/ socioeconomic status etc.) similar or different? If they are different, what determines these different practices?

5. Can India shift from its present parallel policy model of medical education to integrative policy model? If yes, how?

In a span of, say 5 years from now, such an institution with handful of skilled personnel is likely to come up with answers to these and many more questions. These questions must be addressed through proper research methods and tools such as surveys and interviews. Workforce that already exists in health sector in different States can be utilized to generate data to support decision making. These answers should guide the future policies that we will have, not the opinions of certain expert groups.

(This article was first published as a blog post on a personal blog of the author.)