Understanding of Physiology of Respiration in Ayurveda

Respiration is the process of obtaining oxygen from environment to inside body, its transport up to the tissues and utilisation of oxygen by the cells within tissues to produce energy. The oxygen is obtained from environment to inside of the body by the act of breathing which is also called as external respiration. In Ayurveda the act of breathing i.e. inspiration (Nihshwas) and expiration (ucchswas) has been considered as a vital sign of life and characteristic of Atma.   The act of breathing is the physiological function of Prana vata and Udana vata and it is related to Pranavaha srotas. The Pranavaha srotas is a channel or path through which the external air (prana vayu) enters into the body to sustain life.

Pranavaha srotas is understood as respiratory system in context to Sthula srotas , since it take in the Prana vayu (air) as nutrient from external atmosphere through respiratory tract and  its main functional contribution in body  is to provide oxygen.

Respiration is a biochemical process in which cell of an organism gets energy at cellular level by combing oxygen. There are various references in Ayurveda text under the description of Vata dosha, patho-physiology of Pranavaha srotas, Kostanga , Dhamani , Marma, etc. which suggest the description clinical physiology of Respiration  by Ayurveda scholars.

Upper respiratory tract extends from nose to pharynx and include the following:

Phuphusa (Lung) is the major organ of respiration and Sharangdhar has mentioned that it is situated on left side of heart and called it as Udanavayuadhar.  Udana vayu refers to expiration or expired air, since the lungs do not get completely deflated during expiration and few amount of air is always retained in the lungs called as residual air, so it is called as Udanavayuaadhar.

Shrikanta dutta has considered lungs as Raktashya means reservoir of blood. It is very scientific observation since lungs are highly vascular structure and can accommodate 900 ml of blood.

Shshruta has mentioned the word Anilayan for air pathway under the description of Swaraghan a type of Kantagat roga caused by Vata and Kapha. The characteristics of this disorder are seeing darkness before eye, dry throat, breathlessness with wide open mouth, air pathway are obstructed due to Kapha dosha. This description of Anilayaneshuvayubhageshu could be understood as whole shwasmarga i.e. from tracheas to alveoli.

All these references suggest about the anatomical structure of respiratory pathway but there is no reference to suggest the direct functional relation of lungs with the respiration.

Sharngadhara has described many important steps of respiratory system physiology, systematically which are as follows:

Although the major arteries and veins are connected to heart but Sharandhar has mentioned their connection with the Umbilicus this might be possible that he has taken this connection on the basis of fetal circulation as the fetus gets oxygen from mother through the vessels which are connected with umbilicus .

This explanation refers to description of internal respiration i.e. utilization of oxygen by cells and release of energy to perform various cellular functions. This refers to the expiratory and inspiratory process i.e. the mechanism of ventilation and gaseous exchange at lung. (Sha.pu.5/48-49)

The word nabhi (umbilical region) in relation to ventilatory mechanism could be understood as the participation of diaphragm and abdominal muscles in the process of ventilation.The direction of expiration from abdomen is in the upward direction, through chest and throat region.

Nabhisthapranapavanh could be understood for supply of nutrients and oxygen from maternal circulation to foetus through umbilical cord in intrauterine life.

Prana vayu situated in murdha (head, respiratory centres’) gives stimulation to all the muscles of respiration, for expansion. It also stimulates diaphragm and abdominal muscles. Due to its activity the chest cavity broadens and inspiration occurs (A.H.Su.12/5).

Udana vayu is responsible for the process of expiration (S.Ni. 1/14)

The activity of Prana and Udana vata refers to nervous regulation of ventilation. The activity of Inspiration is regulated by Prana vata where as expiration is by Udana vata. Main dwelling Site of Prana vata is Murdha (head). The Inspiratory and expiratory group  of neurons are situated in Medulla and Pons. यो वायुर्वक्त्रसञ्चारी स प्राणो नाम देहधृक् |(S.Ni.1/13)प्राणोऽत्र मूर्धगः| उरःकण्ठचरो बुद्धिहृदयेन्द्रियचित्तधृक्  | ष्ठीवनक्षवथूद्गारनिःश्वासान्नप्रवेशकृत्|(A.Hri Su.12 /5)

Gaseous exchange-  ‘Spristvahritakamalantaram’ word indicates the gaseous exchange at the alveoli, after that the impure air comes outside through the kanta (throat, nasophrynx). Here word ‘Hritakamalantar’ could be synonymous for lungs as amberpiyush word is used for oxygen.

In Pranavaha srotas , external prana dravya ( vayu/oxygen) is  taken into blood by the lungs  and then it is transported with Rasa-Rakta throughout the body  via heart by the action of Vyana vata.  Sharangdhar has described about the Dhamani (artery) and Shira (vein) which are connected with Nabhi (umbilicus) and spread all over the body and supply air to all the tissues (Sha.Pu.5/47)  Dhamani (artery) carry Rasa dhatu all over the body and fill it with air (Sha.Pu.5/39). All these description may be understood as transportation of gases through circulation of blood and supply of oxygen to tissues.

Sharngadhara has mentioned the role of Vayu (air/oxygen) in dhatu-poshana or tissue nourishment and this explanation refers to cellular metabolism in the presence of oxygen.

Kshut (sneezing) is the sound produced in the nose by upward movement of prana and udana vayu and kapha in the head. This description could be understood as sneezing reflex for clearance of upper respiratory tract.

In Sharirsthan Charak has given various measures for establishment of respiration in just new born baby like striking of stones near the ears of child, sprinkling of hot and cold water on face.  If baby does not gain vitality then the baby should be fanned with a fan prepared with straps of bamboo (C. Sha. 8/42).  All these measures indicate the description of resuscitation and artificial respiration.

All the textual references i.e. Samhita chapter number and verse number have been mentioned in the text.

Q.2. Which dosha regulates the act of inspiration.

Q.3. Which is responsible for regulation of act of expiration:

Q.4. Which statement is not true about the Phuphusa.

Q.5. Which  is responsible for sneezing:

Q.6. What is the measure for establishment of breath in new born baby:

Q.7. What is the effect of inhaled air (prana vayu) in the body:

Q.8. Which statement is true about Pranavaha Srotas :

Q.9 Which statement is true about the word  Pranaapanau:

Q.10 The word AmberPiyush refers to:

Understanding of Physiology of Respiration in Ayurveda from Ayurveda Network, BHU 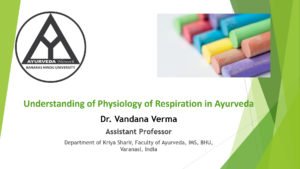