This is a transcript prepared by Dr. Varsha More
based on the lecture available at Ayurvedic Principles of Human Physiology

The division of food into ‘Sara’ and ‘Kitta’and the major portion of digestion occurs in the small intestine.  ‘Sara’ is the nutritive portions that get absorbed and the non-absorbable part i.e Kitta gets excreted. This happened with help of ‘Pachak Pitta’. Though made up of five basic elements, it is dominant in the fire principle, so it is devoid of fluidity and is called ‘Jatharagni’. The term Sara has been discussed in the fourteen chapters of Sutrasthan of Sushruta Samhita.

At the beginning of the above shloka, Sushruta explains the different classifications of food. The classification is enumerated such as the one based on the Panchabhautika composition, another one is of four types based on the physical property of foodstuff. The third type of classification is based upon the prominent Rasa out of six tastes to which one or two Rasa could dominate. The fourth classification is based upon Veerya i.e Sheet Veerya and Ushna Veerya. Another classification is based on Ashtavidha Veerya, it could be further divided into eight subtypes. Based on the twenty types of Gunas(attributes), food can be further classified into several categories. Such type of food when get completely digested by the action of Agni, the resultant product formed is called Sara which is minute in nature. This minute portion formed after complete digestion of food is called ‘Rasa’. This minute portion named ‘Rasa’ after reaching the Hriday nourishes all other parts of the body.

How the Rasa does reaches to Hriday?

Samana Vata governs the re-entry of ‘Rasa ‘into the heart.

Sushruta simply mentioned that the minute product formed after the action of Agni is the only ‘Rasa’. While in the verse mentioned in Atank Darpan further clarifies that the product generated after the action of Agni contains Rasa as well as Rakta because both of them circulate together inside the body. The above explanations clarify that blood reaches the heart from the periphery and from there onwards it gets pumped to other parts of the body.

The root of Rasavah Srotas consists of a heart and ten great blood vessels attached to it. These ten great vessels may include great veins and big arteries that originate from the heart. Number ten should not be taken in a literal sense rather it should be understood as few blood vessels carry Rasa towards the periphery.

How does this Rasa get pumped into peripheral parts of body?

The above verse explains that Vyan Vata is situated in the Hriday (heart) and it causes the propulsion of Rasa Dhatu from the Hriday. Today we know that the heart muscle has its intrinsic capacity to generate impulses and that is how the pumping is made possible. This intrinsic function of the heart is under the influence of the sympathetic and parasympathetic nervous systems. The entire autonomic nervous system controls the heart and the intrinsic ability of the heart to generate its impulses and to beat continuously. So all such controlling mechanisms can be included under the functions of Vyan Vata.

The continuous function of heart and the continuous flow of blood in the body could be interpreted by knowing certain adjectives that have been mentioned in the second line of the above shloka.

Meaning of adjectives used in the verse:

By the action of Vyan Vata flow of Rasa occurs simultaneously in the entire body, everywhere in the body continuously and forcefully. So one needs to understand that the physiology of circulation has been explained under Rasavah Srotas and not the Raktvah Srotas. Because Raktavah Srotas is mostly indicative of the ‘Hemopoietic System’, not the circulatory System’.

Vyan Vata moves through the entire body. The major function of Vyan Vata is to cause the movement of Rasa.

Vita, Mutra, and Malarupi Vayu are three important waste products of Ahar. Saar is nothing but the Rasa that has been explained earlier. This understanding becomes important to understand the physiology of cardiovascular system and its relationship with digestion. Only the absorbable portion gets absorbed from the gut and it becomes the Rasa Dhatu. This Rasa enters the Hriday and then gets carried all over the body. Forceful expulsion of this Rasa because of the activity of Vyan. This Rasa afterward nourishes all the other Dhatus.

The analogy of a rotating wheel called ‘Chakra’ has been used to describe circulation. The nourishment of all the Dhatus takes place in a manner that is similar to a rotating wheel. The term circulation originates from a circle or circular movement which means something starts from some point and it returns to the same point after completing the circuit. Similarly, the analogy of Chakra captures the idea of circulation.

This reference from Bhel Samhita is very important because this is possibly one reference that explains the basics of the systemic circulation. It is said that this Rasa Dhatu is ejected out of Hridaya and from there onwards it moves all over the body. It once again reaches the Hridaya through the blood vessels known as Siras. Therefore Sira can be originated from Heart. This entire circulatory system is a closed circuit. It originates in the heart and ends up in the heart. The term Sira need not be always translated as vein because they originate in heart also.  Here Siras can be considered as all type of blood vessels that originates in the heart and take the blood to all parts of the body and then carry the blood towards the heart.

Ten major blood vessels that are attached to the Hriday run in the entire body. It carries the Oja which is circulating along with Rasa. It means that Ojas also circulates along with Rasa. In the previous references, it has been mentioned that Rakta also circulates along with Rasa.  Therefore three important fractions that run in the cardiovascular system are Rasa, Rakta, and Ojas. Life is sustained because of Ojas that circulate along with Rasa. The site of origin of these blood vessels is comparatively gross, while tracing it towards the periphery they become minute and narrower. This appearance is like the reticular venation seen on the leaves.  This is how these vessels divide and re-divide to become narrower. There are around 700 important blood vessels. The number 700 need not be important. It should not be taken in the literal sense. But it only indicates that there is a huge number of blood vessels.

In human beings, Hriday is a good reflector of wellbeing and ill health of the body. This Hriday keeps on contracting and relaxing continuously on its own in repetitive fashion.

Hriday looks like an inverted lotus bud. During day and night, it continuously undergoes contractions and relaxations. These repetitive actions seen on the Hriday occur in continuous fashion day and night.

Rasa when pumped out of the Hriday it moves in a fashion similar to that of sound, flames of fire, and the waves of the water. Among the three analogies used here, Shabda travels with maximum velocity, and then comes the fire because the wildfire spreads dependent on the wind velocity. Wind velocity is less than the sound velocity. Water moves with minimum velocity among the three. Surprisingly the blood moves in the body in this way also. From the Aorta the velocity of blood can be observed that the mean flow velocity goes on getting reduced. In the big arteries, it is maximum. In smaller arteries and arterioles it is moderate and in the capillaries it is minimal. This is how the Rasa circulates inside the body.

The movement of Rasa and nourishment of other Dhatus is explained based on an analogy which is like the several canals that are used for irrigation of different fields of grains. Here water from the water reservoir is carried through the canal to irrigate the different fields. Similarly, Rasa also acts as a nutrient pool, and other Dhatus derive their nutrition only through this pool. First, Rasa nourishes Rakta and it becomes like Rakta. Then it moves on to other Dhatu. Thus Rasa itself nourishes all other Dhatus. Rasa represents a common nutrient pool from which all other Dhatus derive their nutrition. This is one important theory of circulation.

Another theory of nutrition is mentioned as Khale Kapot Nyay. The similes used here to explain this is that of pigeons that fly away from their nests to pick up the grains from the stored heaps of grains and pigeons return to their nests. So, the distance covered by them from their nests to the heaps of grain determines the nourishment of different pigeons and how fast they get nourishment. Likewise, tissues also get nutrients in the same way, based on the distance from the nutrient pool to the different tissues. So this is applicable in some instances of physiology. In the liver, the central vein is the vein that ultimately drains to become the hepatic vein. The branch of the hepatic artery branch and branch of the portal vein drains the blood into the sinusoids of the liver. The peripheral part of the lobule receives oxygen-rich blood because there is a mixture of arterial and venous blood. The peripheral parts of the lobule receive nutrient and oxygen-rich blood. While the blood reaches the central vein, the hepatocytes surrounding the central vein portion receive oxygen-poor blood. This kind of transport pattern may be observed in many other parts of the body also. 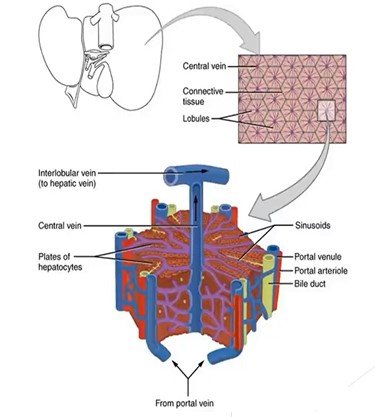 Lecture on “Concept of Genetics in Ayurveda WSR to Prakriti” By- Dr. Narendra Shanker Tripathi