The Concept of Manas in Ayurveda

Ayurveda is the science of life in general and a system of medicine flourishing day by day. It is becoming popular in the country and abroad due to its valid fundamental doctrine and holistic approach. Ayurveda believes in complete health which covers all the aspects of health like physical, mental, spiritual, and social. Mental health is based upon the concept of ‘Manas’ (mind/psyche). Therefore a thorough understanding related to the concept of Manas is needed. These understandings can be utilized in the promotion of health and cure of disease.
Manas word is derived from “मन्यते ज्ञायते अनेन इति मन”
Manas is the entity that causes the thought process. Any kind of thinking takes place because of the presence of manas. In a wide sense, it reflects intellect, perception, sense, and will.

Ektvam (oneness), Anutvam (atomicity) are the attributes of Manas. As quoted by Acharya Charak–

According to Acharya Sushruta, Manas possess the quality of both the sensory as well as motor organs. As quoted-

Location or abode of Manas

It is located in  Hridaya (heart) as per Acharya  Charak  While according to Acharya Bhela, it is situated between shir and talu (between skull  and palate). The entire sentient body serves as a passage as well as the location for Manas. As quoted by Acharya Charak–

The sense faculties are capable of perceiving the object when they are motivated by Manas. For instance, sometimes a person understands something and sometimes understanding does not take place. It suggests that perception of knowledge is facilitated by the presence of Manas while the absence of knowledge reflects a lack of association between Manas and sensory organs. Therefore, Manas is the entity that is solely responsible for the perception and absence of knowledge. As quoted-

The sattva or manas is ‘Aupapaduk’ (intermediary agent) that joins the ‘Jiva’ (soul) with the gross body. As quoted-

Control of sense organs, self-restraint, hypothesis, and consideration represents the action of the mind. As quoted-

Manas is considered one among nine Karan Dravya. As quoted-

It is also considered as one of the Adhyatma–Dravya causing indulgence or non-indulgence in virtuous or sinful acts as per Acharya Charak.

Association of Manas with Rajas and Tamas

Mind is always associated with Rajas and Tamas, but all defects are caused by ignorance (tamas) or lack of knowledge. The association of impure Manas (i.e sadosha-manas) makes the soul enter into worldly bondage. The cause of movement and inclination of the soul from one body to another is defective mind and potent past deeds. As quoted

Sattva or Manas is one of the four components of Ayu. According to Ayurveda life is the combination of four factors namely Sharir (body), Indriya (sensory organs), Manas( psyche), and Atma(soul). As quoted-

Acharya Charak says that being associated with past actions, the soul along with four subtle bhutas transmigrate from one body to another with the help of Manas. As quoted-

Sattva, Atma, and Sharir are considered as Tridanda (tripod) of life. As quoted-

Sattva, Rajas, and Tamas are considered as Mahaguna attributed to Manas. As quoted by Vriddha Vagbhata-

All the Ayurveda scholars discussed the Manas-prakriti (mental constitution) i.e  ‘Sattvik’, ‘Rajasik’ and ‘Tamasik’ which are very much important in clinical practice. Sattva-pariksha (examination of psyche or mind) is performed on the basis of Manas-prakriti and power of tolerance. As quoted-

Prasanna manah (happy mind) is one of the characteristic features of a healthy person. As quoted-

Manas is considered as one of the Vyadhi-Ashraya(substrata of disease).As quoted by Acharya Charak–

Two types of mano-dosha namely rajas and tamas are mentioned in Ayurveda classics. As quoted-

Manas-roga (psychological diseases) occur due to association with agreeable as well as disagreeable things. As Acharya Charak Says-

There is a very close relationship between the Manas and body and it is justified by Acharya Charka’s quote “sometimes even the body follows the mind and vice versa”.

Vishad (sadness/ grief) is considered as the foremost factor for aggravation of the diseases. As quoted-

It is observed that involvement of the body, as well as mind, can be seen in many diseases such as Unmad, Apasmar, Klaibya,Atisar, Chardi, Arochak and many others.

In the Psychosomatic disorder like unmad (insanity), different types of perversions observed, are illustrated below.

Mano-vibhram: Disturbance in the normal function of Manas.

Gyan-Vibhram: Proper thinking or senses of a particular individual get perverted.

Sheel -Vibhram: Changes in habit or nature of a person in an undesired way.

Cheshta -Vibhram: Changes in the activity all of a sudden which is not normal.

Achar -Vibhram:  Behavior against established rules of conduct that are described in various Ayurveda Samhitas. 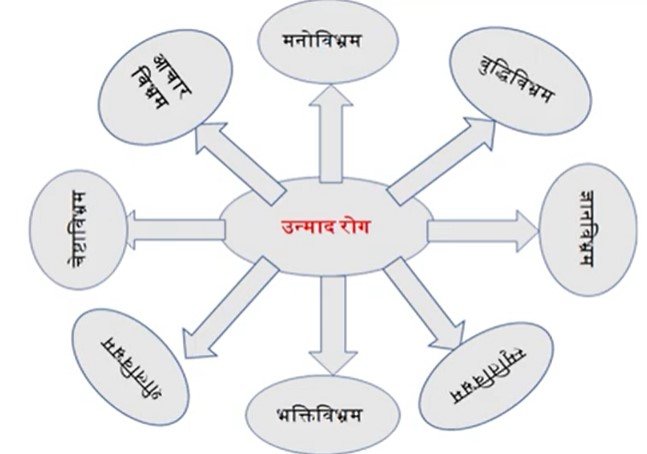 Certain points are to be considered while examining psychosomatic diseases. These are as follows-

History of the genetic predisposition of diseases should be enquired.

Sharir-dosha and Manas-dosha influence each other. Therefore, both types of Prakriti should be examined. Examination of mental stamina in terms of superior, medium, and inferior stamina. The person having inferior mental stamina are more prone to psychosomatic disorders. Persons having good mental stamina (Pravara-Sattva) are comparatively easy to cure.

In somatic disorders, the chronicity of the disease may lead to the development of psychological disturbance. Therefore underlying pathology should be examined very sincerely.