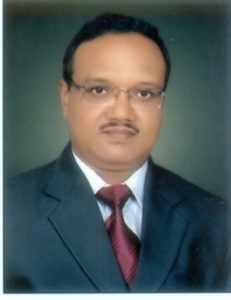 Dr. A. C Kar is a Professor in the Department of Vikriti Vigyan at Banaras Hindu University. He received his MD (Ayurveda) degree in Kayachikitsa (Vikriti Vigyan) in 1995 and Ph.D. Degree in 2000 from Banaras Hindu University. He had served the Department as Senior Resident from 1996-1999 and later joined in Central Council for Research in Ayurvedic Sciences (CCRAS), New Delhi and worked there in various capacities. He left CCRAS while working as Assistant Director (Ayurveda) in 2007. Then he joined as a Reader in Dept of Vikriti Vigyan in Faculty of Ayurveda, Institute of Medical Sciences, Banaras Hindu University and became Associate Professor in 2010 and Professor in 2013. He had served as Head of Department for the tenure from 2008-2011, 2011-2014 and 2015-2018. He is having 22 Years of Experience in the field of Research and Teaching in Ayurveda. His Area of Expertise includes: Ayurvedic diagnosis, Prognostic aspects of diseases, Validation of Ancient Prognostic techniques etc.

He has published more than 100 Scientific and Research papers in reputed International and National Journals. He is the author of a book “Parasitology in Ayurveda” and Editor of the book “Gambhira Vyadi Nidan Chikitsa” and recipient of “Dhanwantari Award” in 2012 awarded by Odisha Ayurveda seva Sansthan”