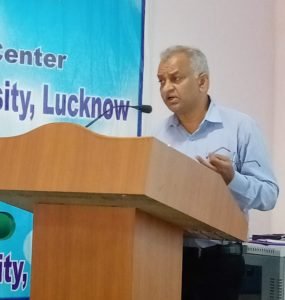 Dr. Sanjeev Rastogi is MD in Kaya Chikitsa (Ayurvedic medicine) from Banaras Hindu University, Varanasi and PhD (Ayurveda) from Lucknow University. He additionally posses Diploma in Yoga from BHU, PG Diploma in Traditional Chinese Medicine (TCM) from China, PG diploma in Health and Hospital Management from IGNOU  and an entitlement for Green Health Care (GHC) leadership from Teleosis Institute , USA. In his academic pursuit, he is currently pursuing MA (Psychology) from IGNOU and also  Course on Rheumatolgy by European League against Rheumatism (EULAR).
After having worked as consultant of Ayurvedic medicine at many prestigious hospitals in India including Marvari Hindu Hospital, Varanasi and HRKD hospital, Lucknow, and working as Associate Professor and Head, Dept of Pancha Karma, State Ayurvedic College and Hospital, Lucknow, India, he subsequently joined as Director, Rashtreeya Ayurveda Vidhyapith, an autonomous organization under the Ministry of AYUSH  , Govt. of India , New Delhi. After a highly gratifying tenure of two years as Director at Ministry of AYUSH, he repatriated to UP State Ayurveda Services at State Ayurvedic College and Hospital, Lucknow.
Dr Rastogi is widely known for his exemplary scientific writings appearing regularly at national and international journals. Seriously engaged in the reform of Ayurveda on contemporary lines, he is helping spread of Ayurveda globally through his writings, consultations and lectures. In recognition to his work, he is awarded with a Chinese Govt. fellowship in 1998, Luisa Kreisberg Family Foundation Scholarship 2008 from Teleosis Institute, California, Consumer Wellness Center Nutrition Grant Award   consecutively for 2 years in 2008 and 2009 from CWC, Arizona, USA and Robert Bosch foundation sponsorship to attend CAM summer school at Pots dam, Germany in 2010. Dr Rastogi had thrice won the international travel grant awards, twice from UGC and once from Ministry of AYUSH, India to present his research papers at international forums.
Dr. Rastogi has over 90 published research papers at various national and international journals. He is also credited for authoring and editing over 9 books and many chapter contributions in books by leading publishers. He is on editorial boards of many national and international journals related to Ayurveda and alternative medicine and is senior editor to ‘Annals of Ayurvedic Medicine’ a peer reviewed quarterly journal published by Association of Ayurvedic Physicians of India (AAPI). He has recently been conferred with IASTAM excellence in teaching award 2018 and has been designated as honorary advisor to Central Council of Tibetan Medicine, India.
He edited three books for Springer Nature. Among these, ‘Ayurvedic Science of Food and Nutrition’ published in 2014 by Springer New York is one of the bestselling books in its segment in Europe and America. His recent book “Translation Ayurveda” by Springer Nature, Singapore is also highly appreciated in the field .