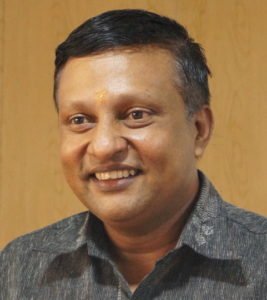 Dr. P. Rammanohar, received BAMS and MD (Ay) degrees from Bharathiyar University, Coimbatore and Rajiv Gandhi University of Health Sciences, Bengaluru respectively. He has been contributing in the field of Ayurvedic research since the last 28 years.

He was the Principal Investigator on the Indian side of the National Institutes of Health, USA sponsored research study to scientifically evaluate the efficacy of Ayurveda in rheumatoid arthritis which was conducted in collaboration with the University of Washington, Seattle, University of California, Los Angeles and AVP, Coimbatore under the leadership of Daniel Furst, MD, eminent Rheumatologist. The outcomes of this study was published in Annals of Rheumatic Diseases and Journal of Clinical Rheumatology and won the prestigious Excellence in Integrative Medicine Research Award from the European Society of Integrative Medicine. This study was recommended as a blue print for future studies on CAM by Dr. Edzard Ernst, a vehement critic of Complementary and Alternative Medicine.He has spearheaded the clinical documentation program called RUDRA and also established the first online indexing service for Ayurveda research papers called DHARA. He has served as Principal Investigator on projects granted by the Department of AYUSH, Indian National Science Academy and the Coconut Development Board.

He has to his credit more than 60 publications, including research papers published in peer reviewed indexed research journals as well as contributions in chapters for books.

Under his editorial leadership, Ancient Science of Life became the largest PubMed indexed research journal in the field of Ayurveda. He serves in the Editorial Board of the Indian Journal for History of Science published by the Indian National Science Academy. He is also the Chief Editor of Abhinava Dhanvantari, the new edition of the first journal for Ayurveda from Kerala published in the early part of the 20th Century.

He has participated in more than 20 major international conferences and over 100 national conferences. He served twice in the Communications Committee of the International Conference on Integrative Medicine and Health (ICIMH) held at Miami and Las Vegas in May 2014 and 2016. He also serves as Head of the Scientific Committee of International Network for Development of Research in Ayurveda (INDRA), the third meeting of which was held at Milan, Italy on 20th September, 2016.

He was honoured with the Ayurveda Marga Pravarthaka Award by the L. Mahadevan’s Ayurveda Foundation in 2014 and Vaidya Sundarlal Joshi Smriti Sodha Puraskara by the Mahagujarat Medical Society in 2015. He also received the Bharadvaja Puraskara Award from Poonthottam Ayurvedashram in July 2016. In 2017, he was honoured with the Dr. C. Dwarakanath Memorial Award by IASTAM. He was co-author and PI on Indian side of the research study on rheumatoid arthritis that won the Excellence in Integrative Medicine Research Award from European Society of Integrative Medicine in 2012.

He is presently serving as Research Director at Amrita Centre for Advanced Research in Ayurveda (ĀCĀRA) attached to Amrita School of Ayurveda managed by Amrita University. He served as a member of Scientific Advisory Group of Central Council for Research in Ayurvedic Sciences (CCRAS), Government of India. He also served as faculty in several institutions that are imparting courses and training in Ayurveda like University of Essen, Germany, Southern California University of Health Sciences, USA, European Academy of Ayurveda, Germany, and Ayurvedic Point, Italy.  He is an approved guide for the PhD program in Ayurveda at Amrita University.

He is Research Advisor (History of Science) for Indian National Science Academy (INSA), Government of India. He is Member of the Scientific Committee of National Institute of Ayurveda. He is member of the WHO Expert Group for development of International Standard Terminologies for Ayurveda. He served as member of Central Council of Indian Medicine (CCIM), Government of India and  He has also served as Member, Program Advisory Committee, National Health Systems Resource Centre, Ministry of Health and Family Welfare, Govt. of India and Member, Sub-Committee for Public Relations, Scientific Communication and IEC for International Cooperation, Dept. of AYUSH, Government of India.