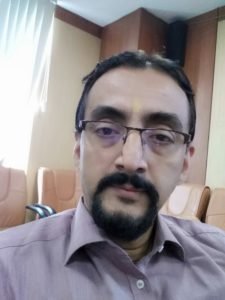 Dr. Shrinidhi Kumar Acharya M.D PhD in Kaumarabhritya (Ayurveda  Paediatrics ) is presently working as Assistant Professor  in Department of P.G Studies, National Institute of Ayurveda,( NIA), Madhav Vilas Palace, Amer Road , Jaipur , Rajasthan  since last 10 years . He is native of Mangalore district of Karnataka and completed his undergrduation in Ayurveda from SDM College of Ayurveda, Kuthpady , Udupi  in year 1999 with distinctions  in all three professions. Later he pursued his post graduate degree from IMS, Banaras Hindu University (BHU) in 2003.  He also completed his PhD from Rajasthan Ayurveda University Jodhpur in year 2011.

He has got 16 years of teaching experience of both undergraduate and post graduates of Ayurveda.He served as Assistant professor and reader in Department of P.G.Studies in Kaumarbrithya S.D.M College & Hospital of AyurvedaTaneerHalla, Hassan for more than 6 years and active in many successful health programmes launched.    Since last 10 years he is rendering his service at   Department of P.G.Studies in Kaumarbrithya National Institute of Ayurveda. (N.I.A), Jaipur.

He is also involved Research activities in Ayurveda since last 16 years and guided more than 20 research papers at post graduate and PhD level. He is recognised guide for P.G and PhD .  He also extended his service as examiner, paper setters, member of inspection committee  etc at different universities and delivered more than 30 Guest lecturers in  different National , International  seminar,CME and Workshops. He has the credit of publishing more than 40 research articles in various international, national and peer reviewed journals.

He authored the text book of Kaumarabhrithya titled Acharya’s Text book of Kaynarabhritya – in two Volumes and gets published from Chaukambha Orientalia, Varanasi. He is actively involved in clinical and patient care activities    as a consultant Ayurveda paediatrician. He is also involved Ayurveda Awareness programme and his programmes were telecasted in Doordarshan, ETV  and Radio.